The University of California Board of Regents today (May 18) approved a policy on nonresident undergraduate enrollment that reaffirms UC’s historic commitment to California residents by limiting the proportion of out-of-state and international students at its nine undergraduate campuses.

The state’s Budget Act of 2016 called for the UC Board of Regents to adopt a policy limiting the number of undergraduate nonresidents as a condition for receiving $18.5 million to support the enrollment of an additional 2,500 California resident undergraduates in the upcoming academic year.

“True to the university’s mission, our nonresident enrollment policy underscores our unwavering commitment to the students of the state under the California Master Plan for Higher Education by offering a place on at least one of our campuses to every California applicant who meets UC’s requirements for admission,” Napolitano said. “It also reaffirms our pledge that nonresident students will be enrolled only in addition to, and never in place of, Californians.”

The newly adopted policy also calls for the UC Board of Regents to review the nonresident policy in at least four years. Periodic review of the policy will allow the regents to assess its efficacy in maintaining and enhancing the educational experience and access of California students.

If you don’t meet UC’s minimum requirements, you may be considered for admission to UC if you earn high scores on the ACT with Writing or SAT and two SAT Subject Tests.

In general, this method of consideration is designed for students who have been unable to meet the regular subject requirements and/or earn a high school diploma because of unique circumstances, such as non-traditional education or long-term illness.

To be considered, you must take either the ACT with Writing or the SAT, as well as two SAT Subject Tests.

You must earn a minimum UC Score total — calculated according to the instructions below — of 410 (425 for nonresidents). In addition, you must achieve a minimum UC score of 63 on each component of the exams.

You may not use a SAT Subject Test to meet these requirements if they have completed a transferable college course with a grade of C or better in that subject.

How to convert your test scores to UC Scores:

If you took the SAT Reasoning Test (prior to March 2016):

If you took the SAT with Essay exam (starting March 2016)

If you took the ACT Plus Writing:

While SAT Subject Tests are not required, some campuses recommend that freshman applicants interested in competitive majors take the tests to demonstrate subject proficiency.

Remember, these are recommendations, not mandates. You will not be penalized for failing to take the SAT Subject Tests. On the other hand, submission of these test scores (just like submission of AP and/or IB scores) may add positively to the review of your application.

College of Chemistry and College of Engineering: Math Level 2 and a science test (Biology E/M, Chemistry, or Physics) closely related to the applicant’s intended major.

Not recommended for any area.

Claire Trevor School of the Arts: recommends that freshman applicants take any SAT Subject Tests that will demonstrate the student’s strengths.

No recommendation at this time.

College of Natural and Agricultural Sciences and Bourns College of Engineering: Math 2 and Chemistry or Physics, for all majors

Not recommended for any area.

Freshman applicants for fall 2017 must arrange to have official score reports sent to us by December 2016. If you plan to take an exam December, indicate the planned test date on your admission application.

And don’t worry — if you report your scores to one campus, they will be shared with every campus to which you’ve applied.

California state universities, one of the largest higher-education networks in the U.S., will limit the number of undergraduates they accept from outside the state, including foreign students, beginning later this year.

A new policy takes effect at the beginning of the 2017-2018 academic year and will limit enrollment of non-California residents to 18 percent of the student population at five University of California campuses: Santa Barbara, Davis, Santa Cruz, Riverside and Merced.

The other four campuses, in Los Angeles (UCLA), Berkeley, Irvine and San Diego, have more than 18 percent non-Californian students. They will be barred from further increasing the proportion of non-state residents in the new school year, which begins in late August on most campuses.

The state Board of Regents approved the new limits Thursday, following a release of an auditor’s report that said California high school graduates who otherwise were qualified for university admission have been losing out to non-state residents.

A tactic the universities adopted years ago — encouraging the enrollment of out-of-state residents, who pay higher fees than Californians, to circumvent state government funding cutbacks — “has made it more difficult for California residents to gain admission,” state auditor Elaine Howle said.

The issue was hotly debated before the Board of Regents voted to enact limits on foreign and out-of-state students.

“I know the in thing today is to build walls, but we are building a wall around the University of California by doing this,” Makarechian said.

The California state university system, one of the largest in the United States, has about 210,000 undergraduates, about 16.5 percent of whom are non-Californians.

Less than 11 percent of the out-of-state undergraduates, about 3,800 individuals, are international students, coming to the U.S. from about 100 countries.

Some of the financial pressures that confront the Board of Regents emerged during this week’s meeting: California’s state-run colleges receive about $61,000 in tuition and other fees each year from non-state residents, while state residents pay about $27,000 less.

However, a state lawmaker, Assemblyman Kevin McCarty, said he and other legislators have been hearing from parents that their children were being denied admission to state universities in favor of out-of-state students with “lower academic scores.” 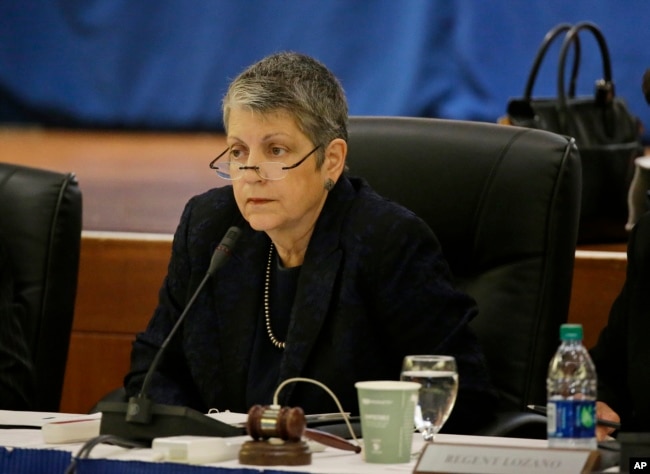 University of California President Janet Napolitano listens during a meeting of the Board of Regents, May 18, 2017, in San Francisco.

University of California President Janet Napolitano said the new limit on out-of-state residents is balanced and supports “our pledge that non-resident students will be enrolled only in addition to, and never in place of, Californians.”

Napolitano, who served as Secretary of Homeland Security under former President Barack Obama, said the state university system still provides opportunities for students from around the world.

Competition for admission at California universities is intense.

UCLA received 102,000 applications for the freshman class whose classes begin August 21. It was the first time that more than 100,000 students applied. Last year, UCLA accepted about 17,500 freshmen, including about 40 percent non-Californians, or 4,600 Americans from other states and 2,500 foreign students.

Overall, the California system received 210,000 undergraduate applications for the 2017-2018 academic year, including 33,995 from out of state and 32,647 from international students, more than 31 percent of the total. Those numbers also reflect a 1.1 percent drop in the number of applications from foreign students.