A California mom who helped her quadriplegic son pursue his Master of Business Administration degree received a surprise at his graduation ceremony last weekend — an honorary degree of her own. (Image source: KTLA-TV screenshot)

A California mom who helped her quadriplegic son pursue his Master of Business Administration degree received a surprise at his graduation ceremony last weekend — an honorary degree of her own.

According to ABC News, Marty O’Connor, 29, was paralyzed in 2012 after falling down a flight of stairs. After spending almost two years working on his physical recovery, he wanted to pursue a new challenge.

“After a certain point I realized that physical therapy wasn’t going to be the end all answer,” O’Connor told ABC News. “I was ready to take on another mental challenge.”

Before his accident, O’Connor worked in sales. So he decided to enroll at Chapman University, in Orange, California, for his master’s degree. But due to his injury, Marty O’Connor was unable to take notes or even raise his hand in class. So his mom, Judy O’Connor, a retired elementary school teacher, stepped in to help him.

She attended all of her son’s classes with him, took notes for him, and raised her hand when he had a question in class during his entire two-year MBA program.

“I did it willingly,” Judy O’Connor told ABC. “When a spinal cord injury happens, you want to swoop in and make everything better and you can’t.”

“This was something that I could do for my son and I was really happy that I was able to help him in that way,” she said.

Judy O’Connor said her son underwent a “total transformation” during his time at Chapman and he excelled at his studies.

Earlier this year, when Marty O’Connor was granted the university’s outstanding graduate student award, he asked Chapman University President Daniele Struppa for a favor — to surprise his hardworking mother with an honorary degree at his graduation. 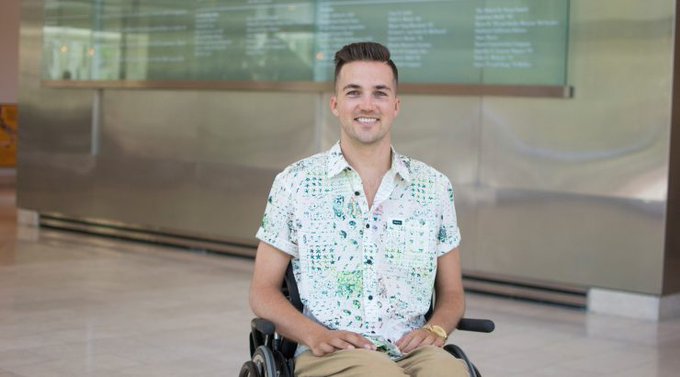 Back to school, and back to work http://chapma.nu/2qt9cjb  Marty O’Connor resets career with #ChapmanU #MBA after accident

“When Marty came to me asking if Chapman could present an honorary degree to his mom – and to keep it a surprise – there was no hesitation to make this happen,” Struppa told ABC News. “The provost, the dean and the faculty Senate immediately approved my request. The dedication from both Marty and his mother in his pursuit for a Master’s in Business Administration is nothing short of admirable. We were more than happy to make this happen.”

At the graduation ceremony last weekend, Judy O’Connor received the degree — and a standing ovation.

“I was so touched that my son would do that,” she said. “It was therapeutic for me to do what I did.”

According to ABC News, Marty O’Connor will soon begin a job as the head of corporate sponsorships for DIVERTcity, a youth sports startup.